Things To Do In Atlanta With Kids: Georgia Aquarium

Thank you to the Georgia Aquarium for sponsoring this post.

I’m not going to lie, finding things to do in Atlanta with kids was not always a pleasant chore for our family. Since Charlie was born, we would have grand ideas about outings with our three little ones and hopes for a picturesque day out in Atlanta, and were often met with disappointment. It can be tricky to find things that are appealing to Grayson AND Charlie, with their age difference. Not only that, but Charlie hasn’t been the easiest baby/toddler to take places, and is just now getting to the place of appreciating family days out. Now that we are back in Atlanta, it seemed like the perfect time to plan a family visit to the Georgia Aquarium!

As a Georgia native, I can’t believe this was my first time visiting the aquarium. I have been wanting to go for years, and never made it happen! Did you know that the Georgia Aquarium is the largest aquarium in the western hemisphere with over 10 million gallons of water? Also, when they opened in 2005, the Guinness Book of World Records certified Georgia Aquarium as having more aquatic life than any other aquarium.

Georgia Aquarium in Atlanta is a 501(c)(3) non-profit organization that contains more than 10 million gallons of water. Georgia Aquarium’s is a scientific institution that entertains and educates, features exhibits and programs of the highest standards, and offers engaging and exciting guest experiences that promote the conservation of aquatic biodiversity throughout the world. As a leader in aquatic research and exceptional animal care, we are dedicated to fostering a deeper appreciation for our ocean and the animals that call it home.

With that, we packed up the kids (and most of the house, lets be honest)- and headed to the aquarium on Saturday morning. We definitely wanted to get there at opening time to beat some of the rush.

When we walked in to the aquarium, we could see that the galleries were essentially on the perimeter of the large atrium. It looked like it would be easy to navigate, by going from one exhibit to the next, and it was! We decided to look at a couple of the galleries before catching the 10:45 waddle walk in the atrium. 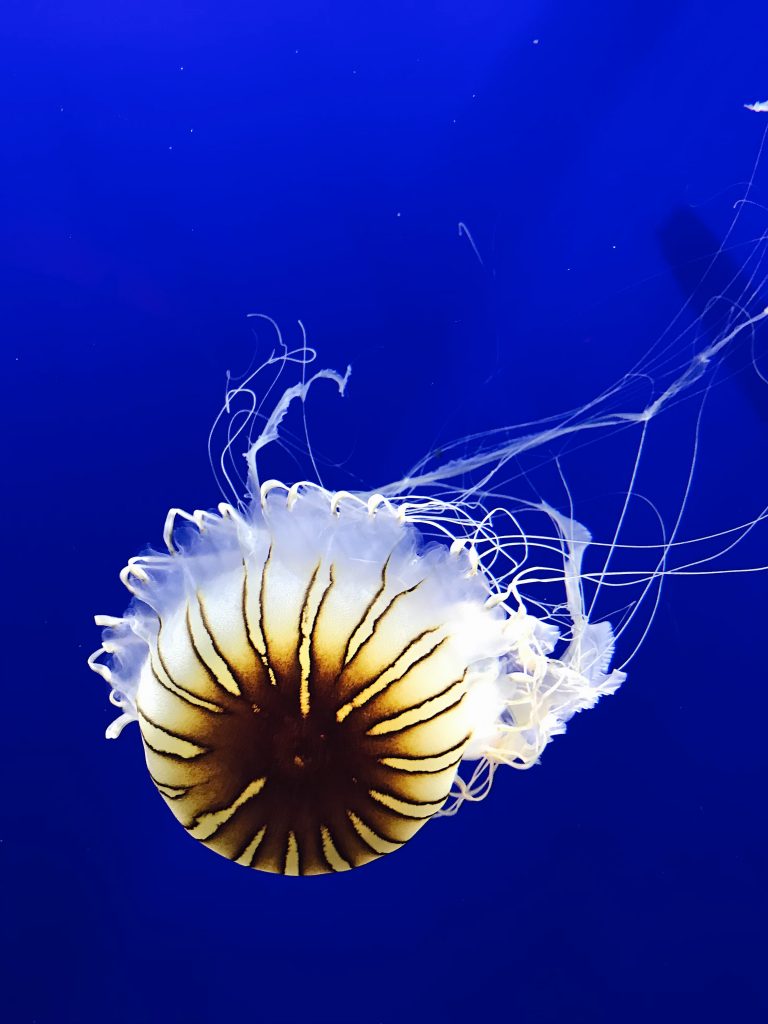 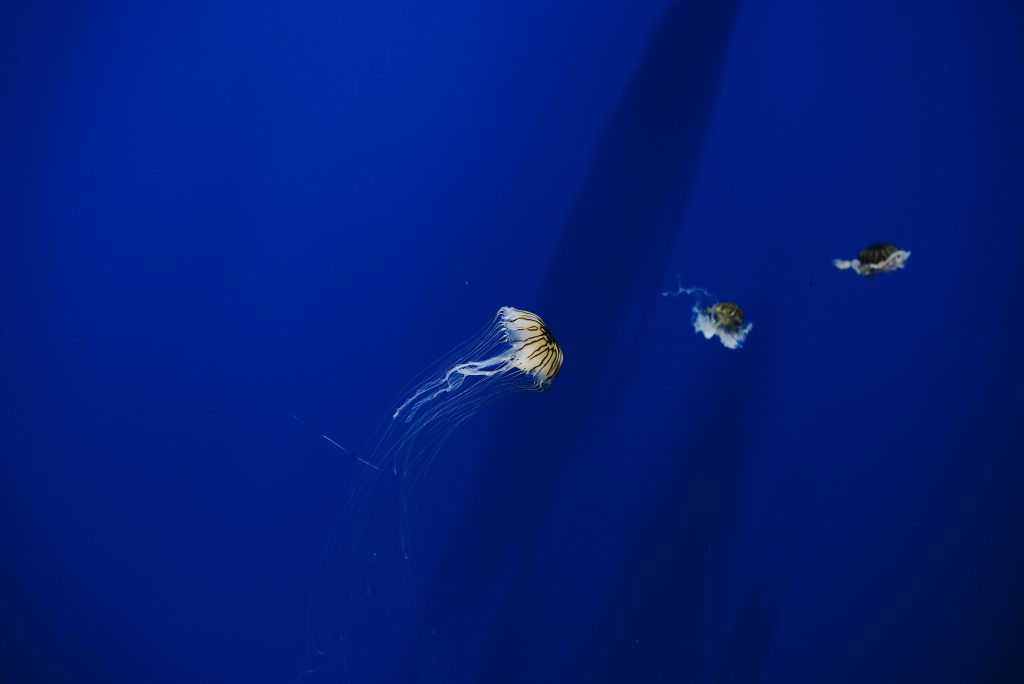 The jellies in “Jelly Alley” in the Tropical Diver gallery were stunning. I could have stayed all day and just watched them! There were multiple types and each one was incredibly beautiful and relaxing to watch. 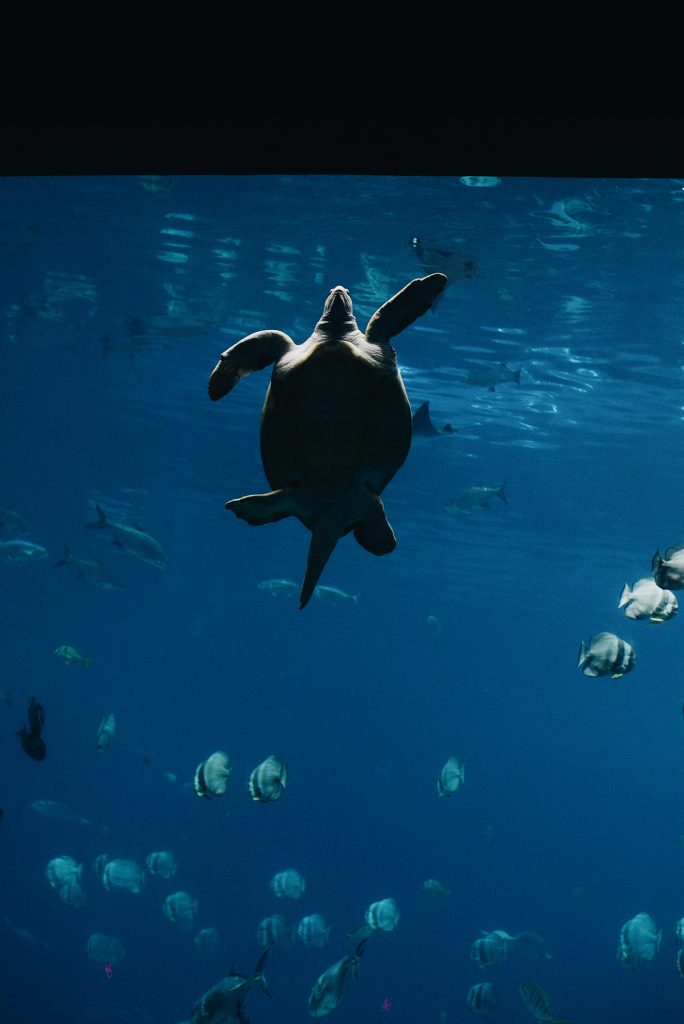 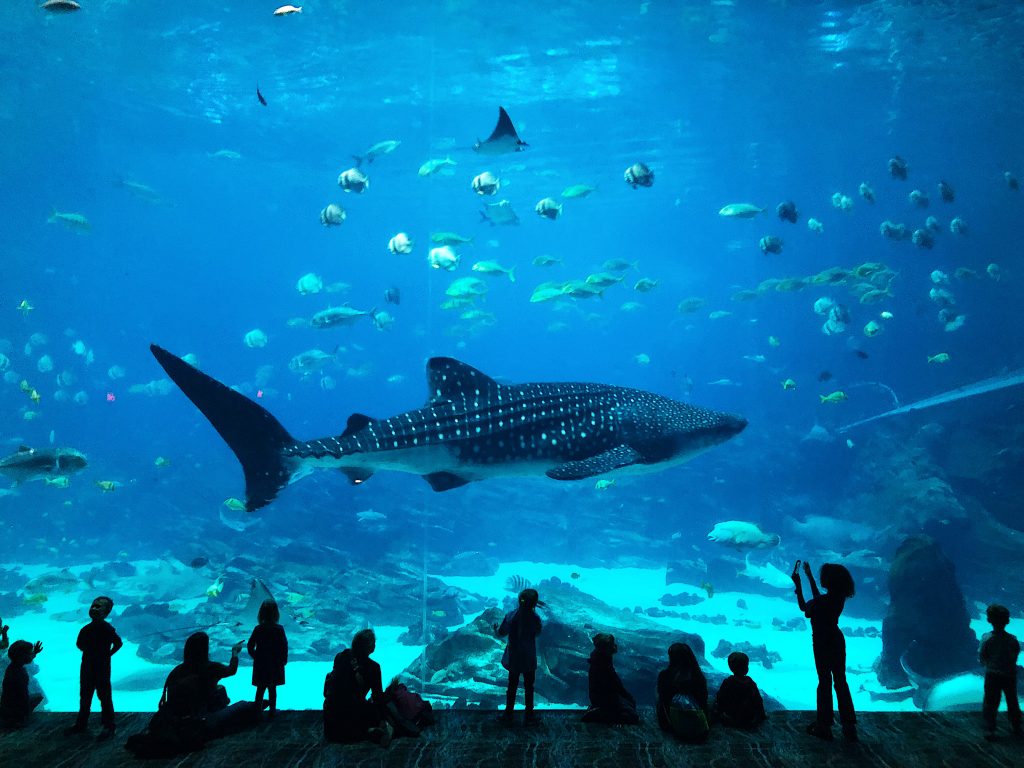 The River Scout exhibit might have been the kids’ favorite! River Scout is Georgia Aquarium’s only freshwater gallery. They got to see so many cool animals, and even touch a few. The coolest part of this was definitely the albino alligator. Charlie was NOT a fan and wouldn’t go anywhere near the glass. 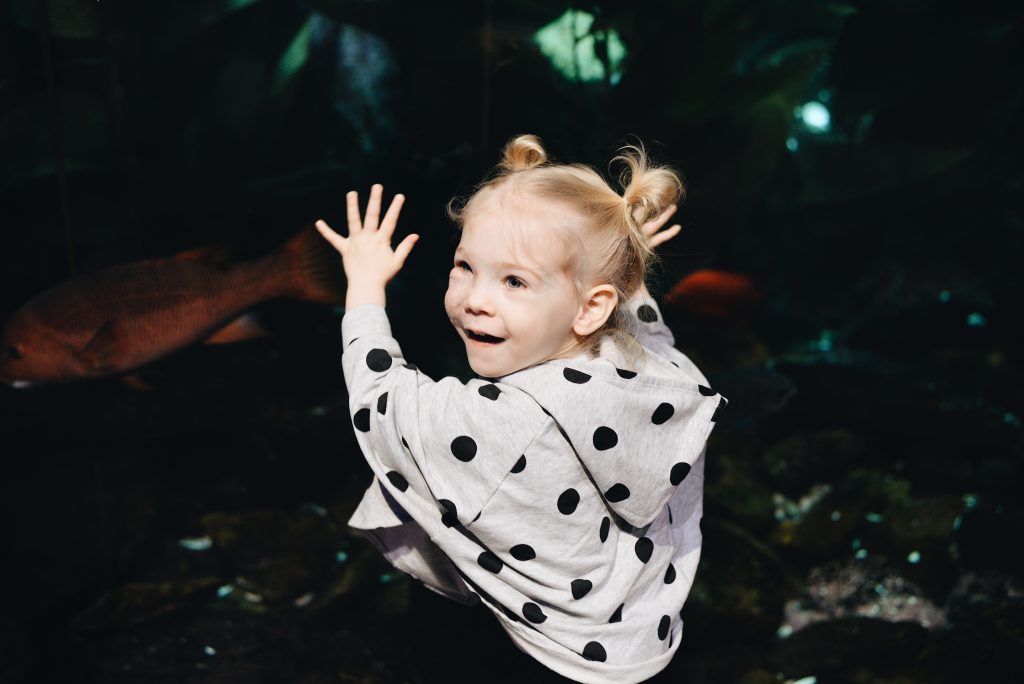 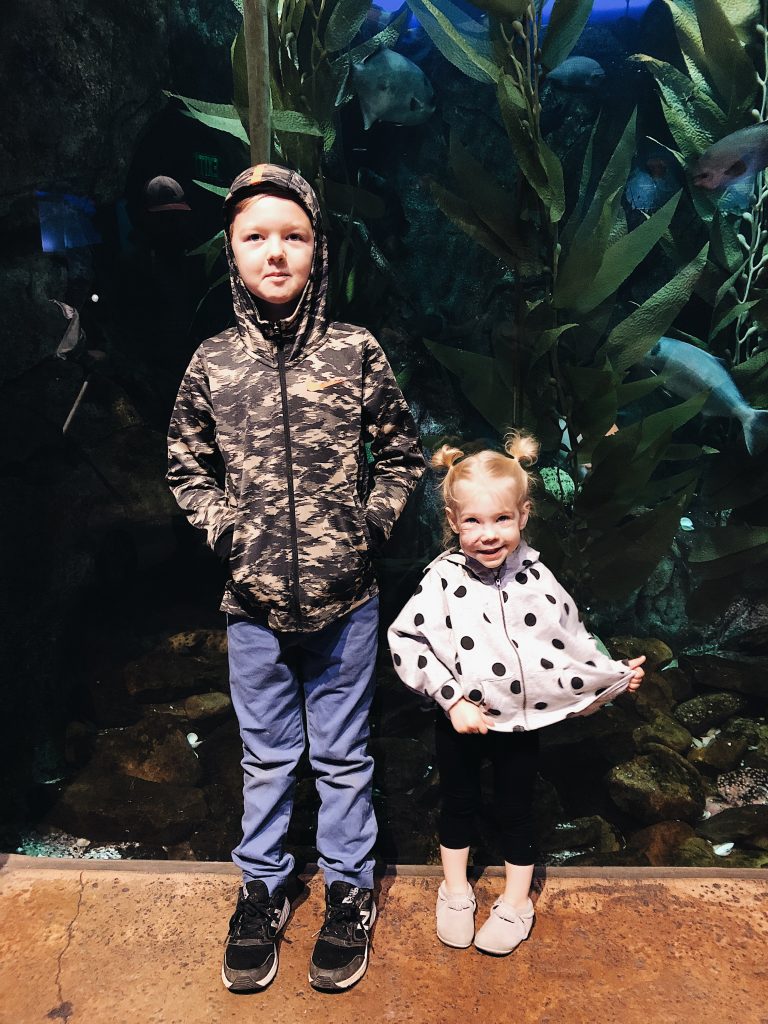 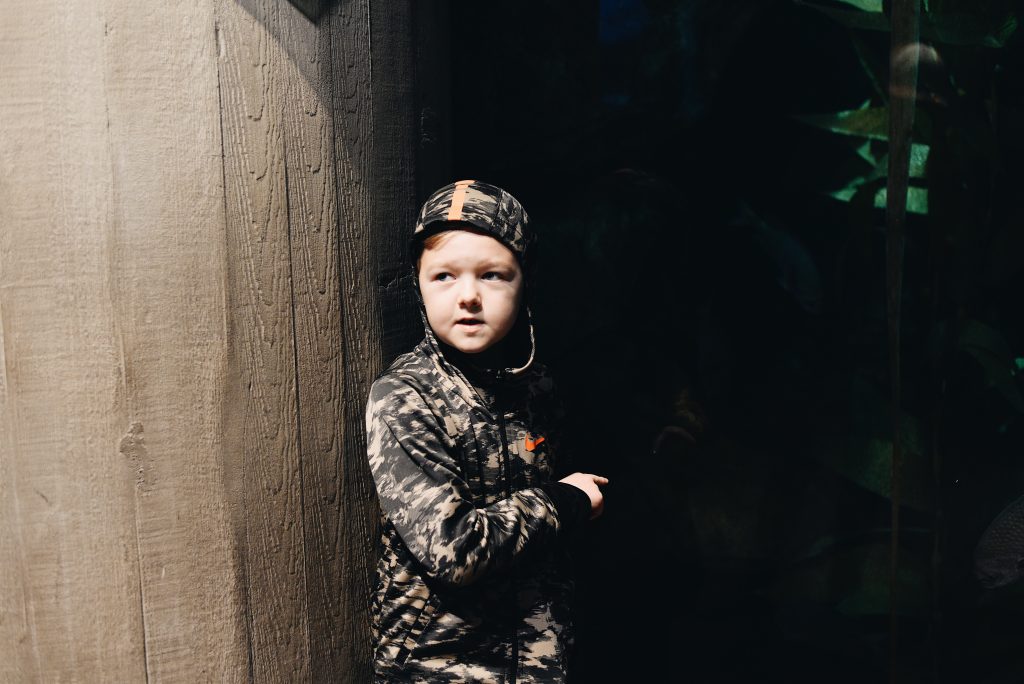 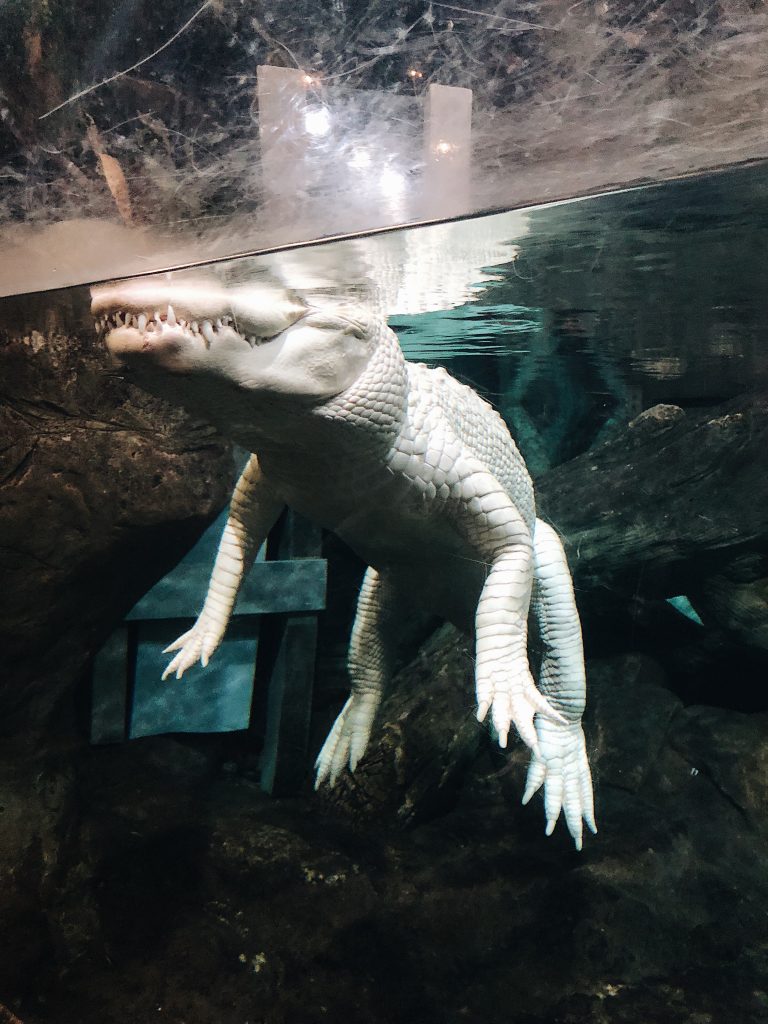 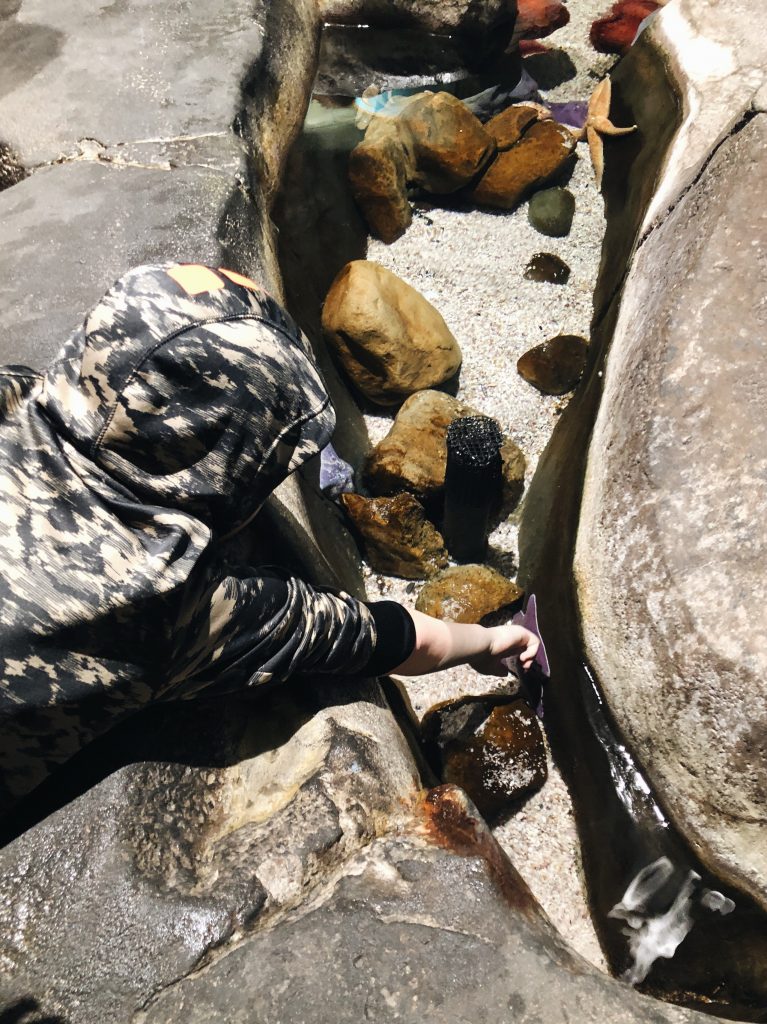 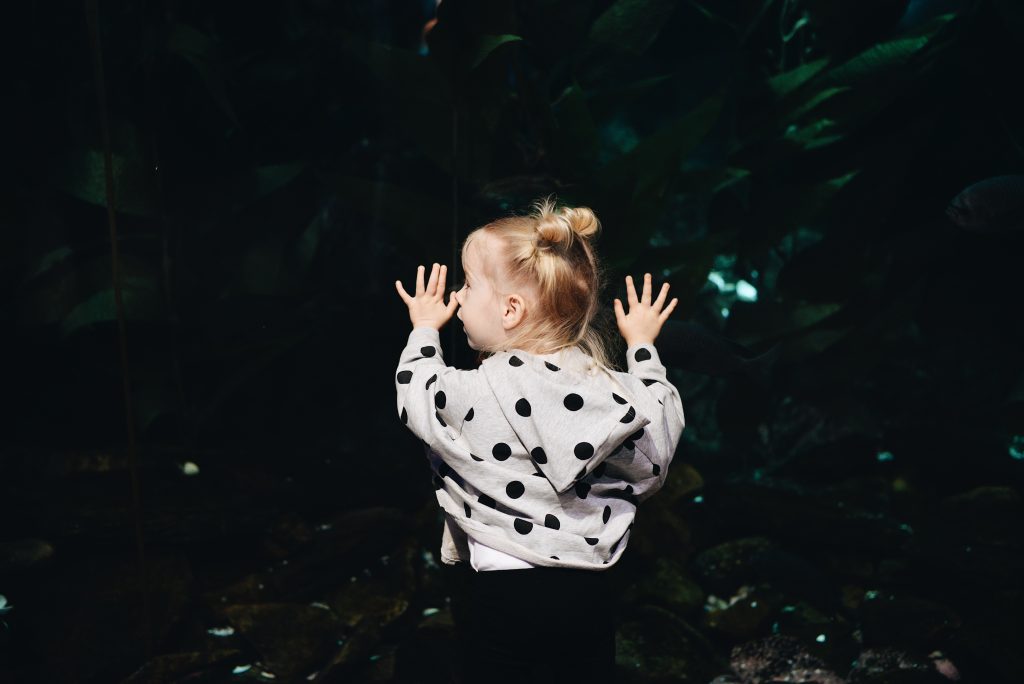 Perhaps my favorite part, was the Coldwater Quest gallery where the new puffins have arrived! The North Pacific Seabird exhibit is beautifully done. There is even a little tunnel where you can kind of “be” in the middle of the habitat with them! It’s such a cool space. 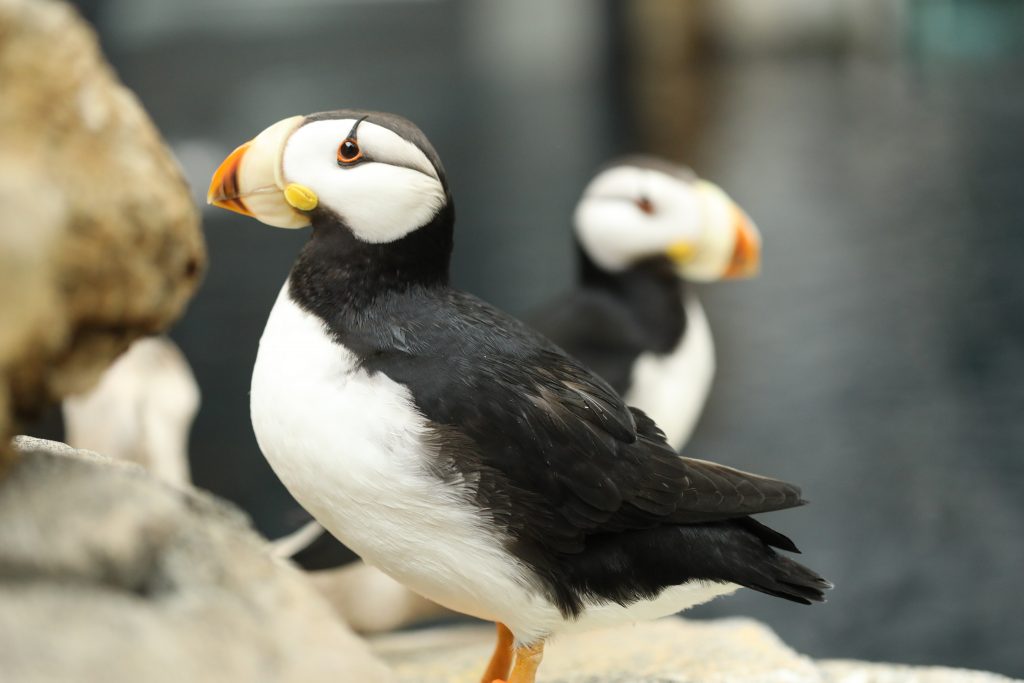 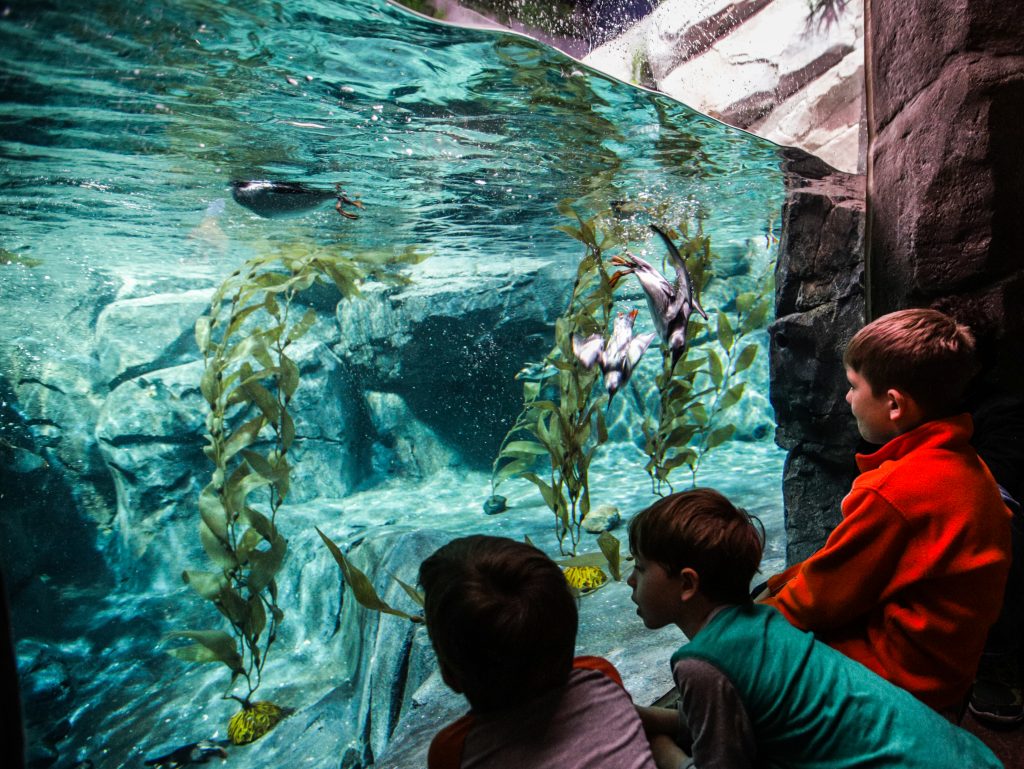 After we checked out these galleries, it was time to grab some food and watch the waddle walk in the atrium. 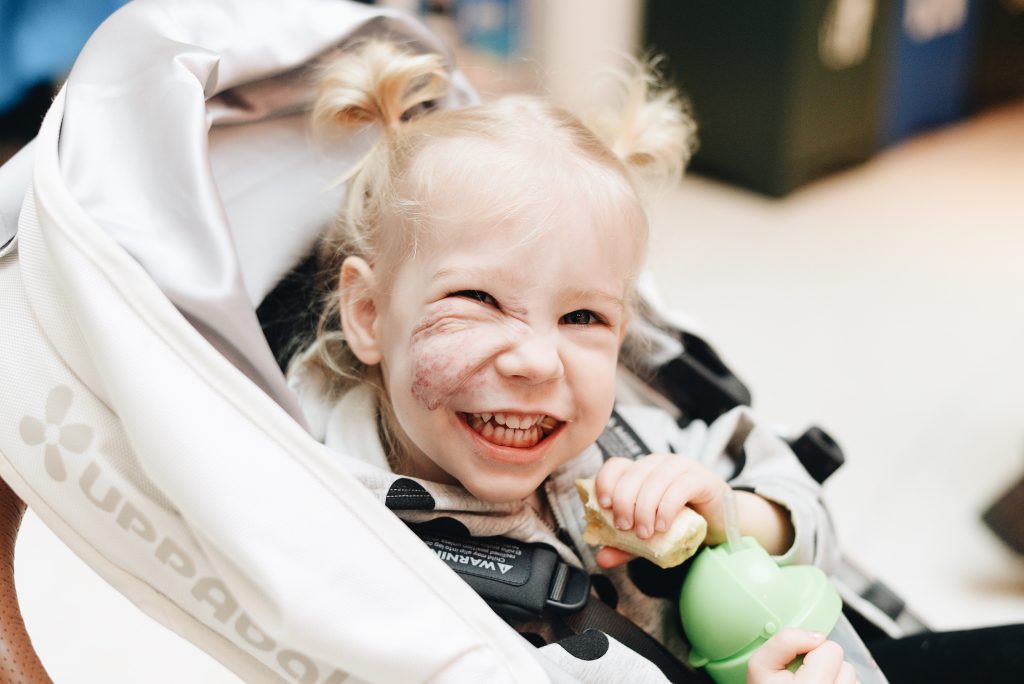 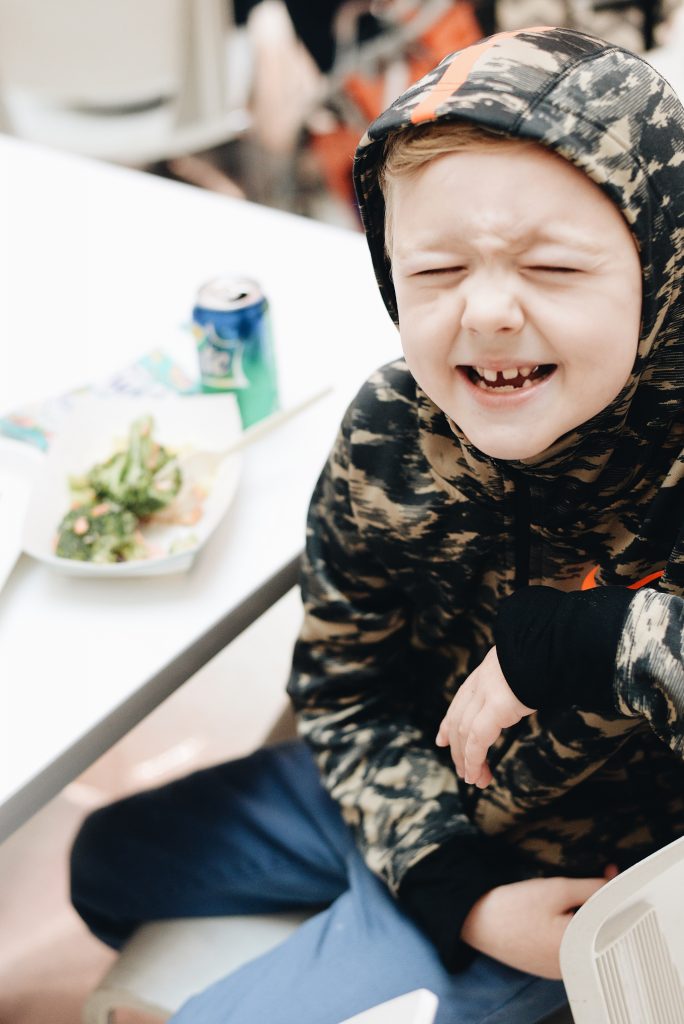 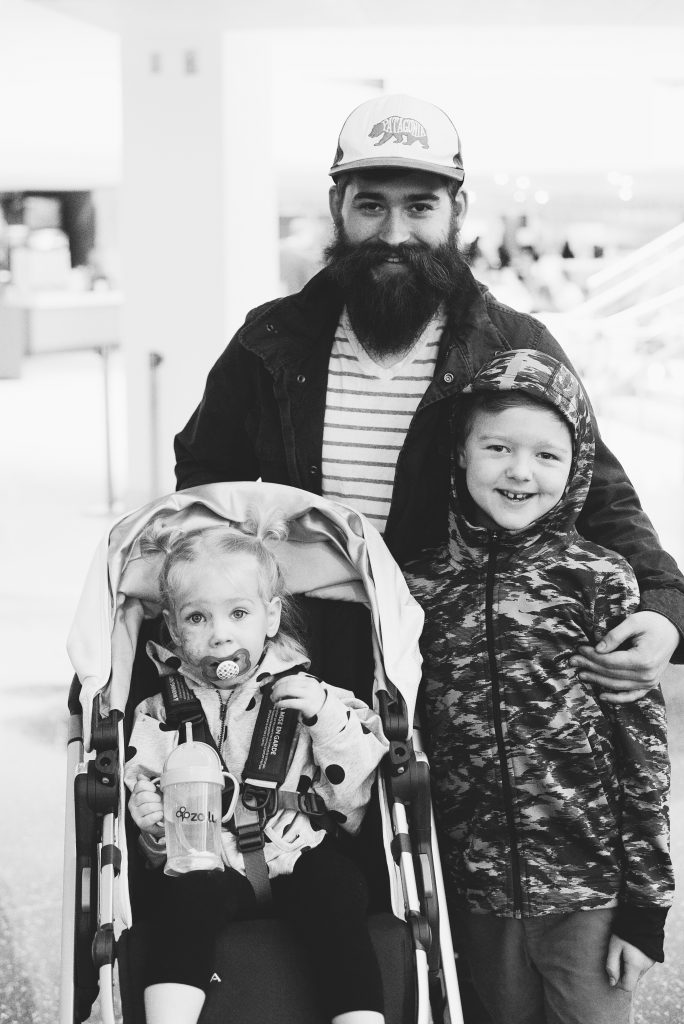 The penguins MIGHT have been the cutest thing I have ever seen. Here’s a clip from my Instagram stories.

The last thing on our agenda was to watch the Dolphin Celebration presentation. 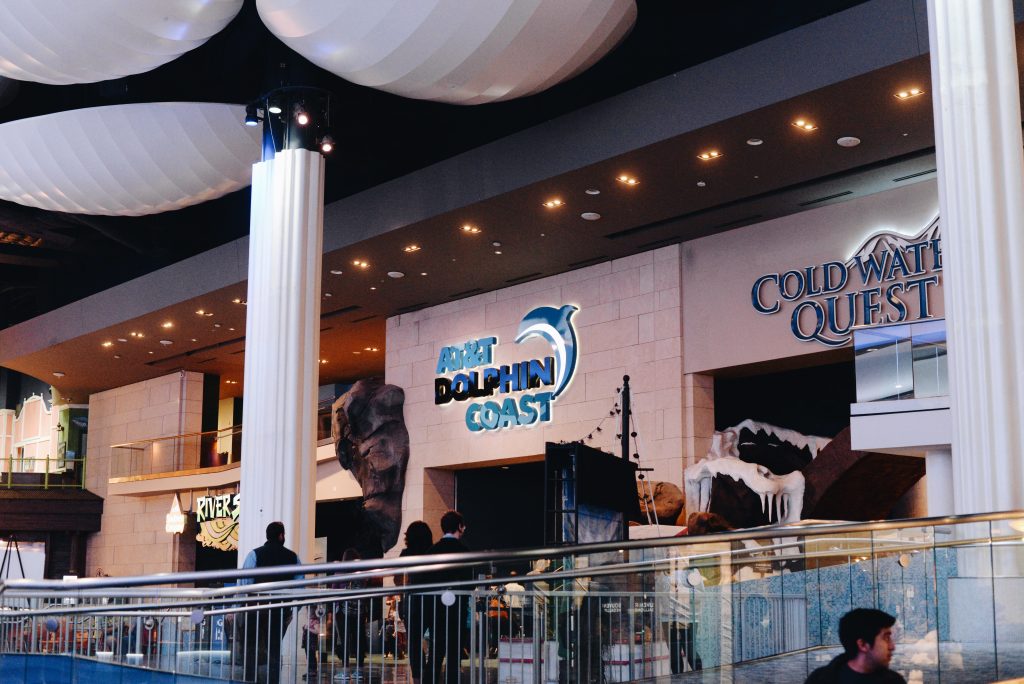 We weren’t allowed to take photos inside the arena during the show, which I kind of loved. It seems like everyone is constantly connected to technology and documenting every second of everything, but during the dolphin show- we were all in the moment! Charlie’s jaw was on the floor for the whole thing. The sheer intelligence and beauty of these animals was mind blowing. Several dolphins took turns playing and performing with their trainers. There were music, lights, and water effects. It was such an amazing experience and one that I will be sure to see again when I go back. I actually never thought I would care to swim with dolphins until now! Add one to the bucket list.

The dolphin show ended our trip to the aquarium, and perfect timing, too- because Lincoln started to get fussy at the very end. We spent almost four hours there and (for us) it was enough time to see everything and experience the dolphin show. Everyone had a blast, nothing was too specific to a certain age, and there were zero tantrums. I call that a win!

Do you live in Atlanta? What’s your favorite place to take the whole family? If you come visit, don’t miss the aquarium! 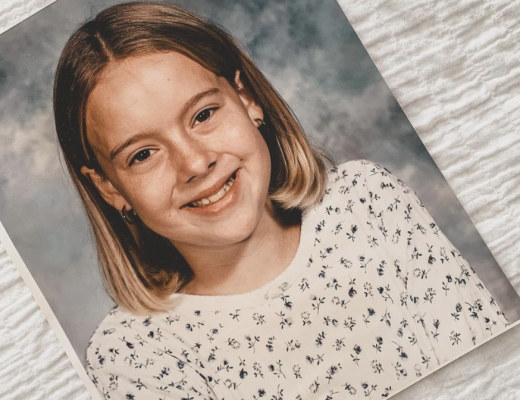 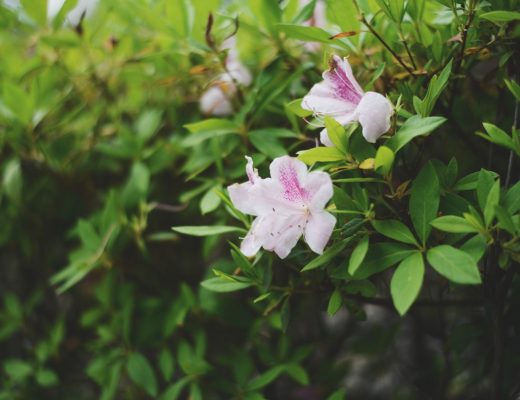 Saying Farewell to The Deep South: A Family Road Trip 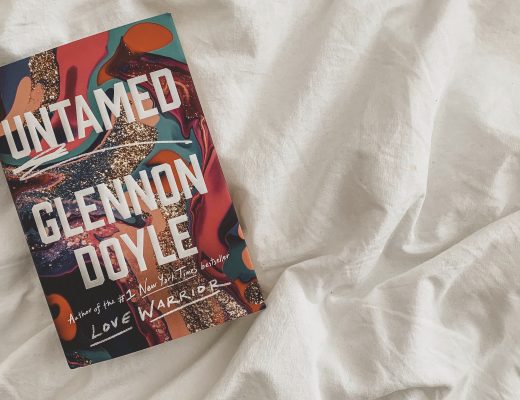 Untamed : The Book That Shook Me