My Mental Health Journey and When I Decided To Stop Suffering

A large part of my DNA and my journey through life revolves around my history of sub-par mental health. It’s taken a few months of courage building to hit post on this one. Nevertheless, I hope at least one person needs this story.

My first panic attack was in the fourth grade. I was nine years old. I vividly remember the trigger, then my heart rate starting to rise, then an inability to swallow, then clammy hands and ringing ears. Within a few minutes I was in a total brain fog, speaking nonsense and literally running out of the gym where we were. I had no idea what was going on, but I knew something was wrong and I needed someone to help me. That’s all I knew.

I was nine years old. Nine.

I lived in a religious, seemingly happy and simple home with my brother and both parents on a quaint island off the coast of Georgia. We were poor, but at the time I was blissfully unaware. Now, as an adult, I can’t recall any trauma or reason that I (at that age) could be suffering from anxiety or panic.

Quite bluntly, the environment I was raised in (while loving and nurturing), was somewhat ignorant to the science and biology of mental illness. Many nights as a kid I woke up in the night with panic attacks. My mom, who had a history of mental illness herself, did her best to understand but often fell short as well. I was often just encouraged to pray, told that my phobias and fears were demonic spirits, or ignored completely. I spent nights begging God to help me feel normal because I was given no other tools. While faith is important and my parents meant well, it wasn’t the answer I needed.

Fast forward through middle school and high school. We moved to a town where I was bullied intensely by my peers. Three years after that (the summer before high school started) my parents divorced. In High School I found myself involved by association in a huge scandal that would later be federally investigated. I wound up dropping out after tenth grade, getting my GED, taking my college entrance tests and starting to earn my Bachelors Degree while my class was in 11th grade. All that to say, my life was never exactly moving according to plan.

For someone with a chemical imbalance, I had experienced a lot to cope with in my little life canoe, but barely had a paddle to row with.

I went into college feeling lost, more anxious than ever, and still trying to accept that I may never be an emotionally normal person. (After all, if it was meant to be, God would have healed me by now? I guess?) Nevertheless, this was my fate and I should accept that my plight would just be exceptionally difficult.

From then on, in my adult life, nothing was easy. Relationships were a battle, my self-worth wasn’t awesome, but I kept going and never made excuses to fail. I even wound up self-admitting myself to an inpatient center for help when I was 21 because my anxiety was totally out of control thanks to a mix of insomnia (from working night shift in ICU, and anorexia from being scared to eat food).

A few years later, I became a mother and I experienced postpartum depression and anxiety in all it’s glory. At the time, I still chalked it up to being “my normal” (and maybe even everyone’s normal after having a baby). Grayson’s dad and I got divorced when he was less than a year old and single mom life nearly did me in. I was either sad, or anxious, or angry, or hopeless. Any of the rest of the time I was probably drinking and avoiding reality. I still didn’t know there was help for me, medically. It was still ingrained in me that I should tough it out, wait it out, or pray it out.

At that point in my life, it was getting harder and harder. The mountains were getting taller and the climb was getting steeper.

When Grayson was a little over a year old, I met Angie (name changed for privacy). Angie was a pastor’s wife in the church I attended while I was a single mom. She had three precious kids and an ideal looking marriage with a wonderful husband and father. Being around their family was a light in my life at the time. I didn’t have to say I was struggling. She knew. She arranged donations of diapers and grocery gift cards for me. She invited me to come hang out when she thought I was probably lonely. She hired me to babysit when she probably could have chosen someone else. She didn’t drown me in biblical rhetoric or only offer her prayers.

She showed me love. Simple, no frills, love.

One day while I was at her house the subject of my mental health came up. I shared that I had been really, seriously battling depression and anxiety for most of my life and now that I was a mom (and a single mom at that), it was getting so hard to manage. She sat me down in her bedroom and told me that medication could probably really help me. She thoughtfully shared her own experience with depression and medication and reassured me that a need for medical intervention with my brain chemistry did not make me less spiritual, less strong or less of a mother.

She asked a poignant question that I would never forget.

“If you had diabetes, would you keep hoping that it would cure itself and live with the devastating symptoms, or would you unapologetically take the medication?”

I realized that not only did I have to worry about my own mental health, but also the people closest to me (like Grayson). It wasn’t just about me. Ok, maybe I could live in a mental hell, but what was this doing to my relationships? How was this bleeding into my parenting? How was this affecting my ability to communicate with people I love? 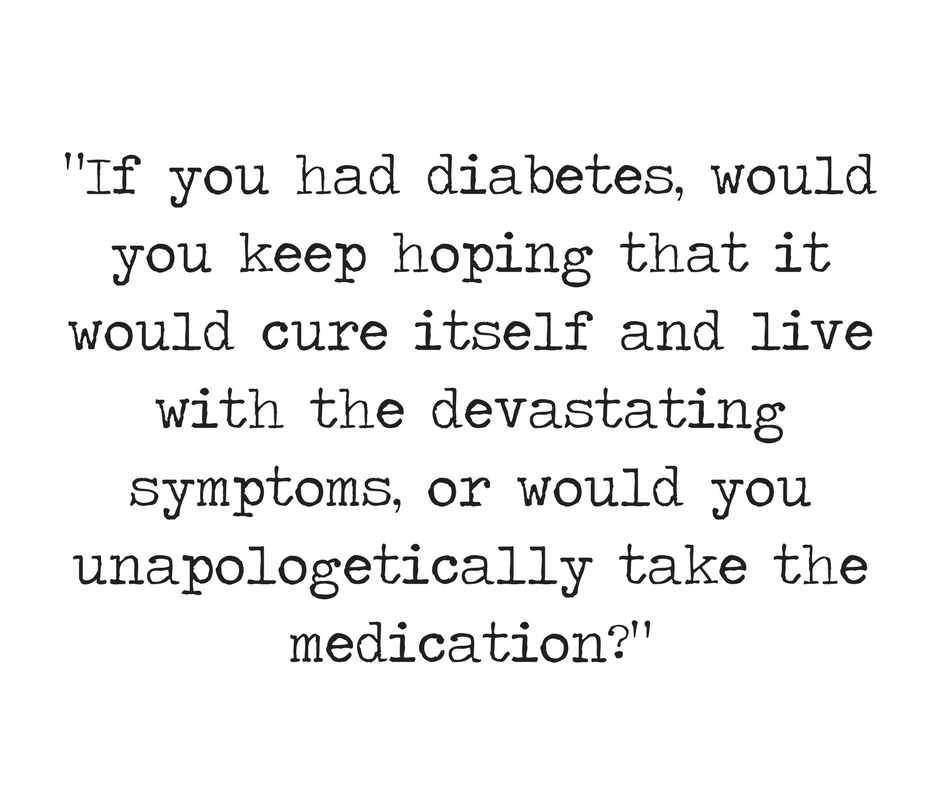 I made an appointment with a doctor to talk about medication and I never looked back.

I learned that even though my genetics, my hormones, and my environment had paved a dark and foggy path for me, there was an alternative. There was a solution. I had missed out years of peace because I was so adamant on fighting this battle with both hands tied behind my back, and for what? Pride? Ego? A fear of judgment? A fear of failing?

The only person I was failing was myself and those who had to deal with me. Once I realized that, I was on the path to freedom.

I wound up starting a medication regimen and outpatient CBT (cognitive behavioral therapy). I’ve been medicated for five years now and I don’t remember life before I started treating my imbalances. No, my personality didn’t change. I still have bad days. I have had to experiment with medication until I found what worked for me. But gradually, my mood stabilized. One day I woke up and life didn’t feel like a tragedy anymore. Instead of trapping a thought in my brain and watching it spiral into terror, thoughts became easy to process and release. The situations that once left me paralyzed and unable to move forward eventually became small bumps in the road with achievable solutions.

I have been medicated through two pregnancies at the advice of Obstetricians, Psychiatrists and Pediatricians. Untreated depression and anxiety is far more harmful to a fetus than safe medication. We deserve to be well. We, as mothers, NEED to be well.

Medication isn’t for everyone. Every person and every situation is unique. It’s truly something to think about with the advice of a doctor (I recommend a Psychiatrist), and some intense soul searching. Many people see results with diet, exercise, acupuncture, or other more natural methods. I totally believe in and applaud those methods, but if they don’t work for you- you aren’t broken. You just might need something more. I did, and I have no regrets. 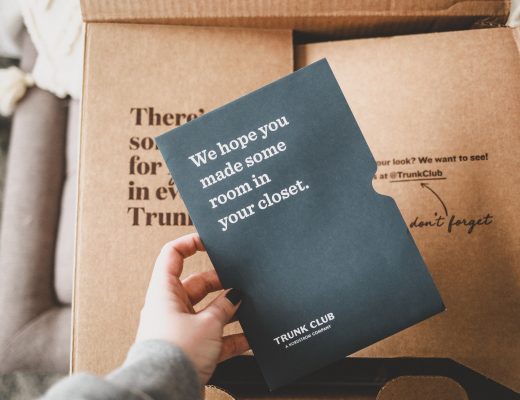 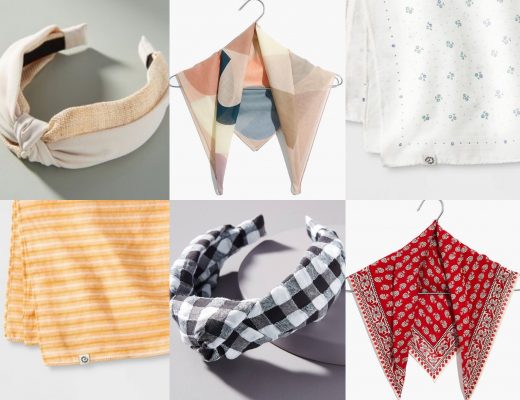 The Best Headbands And Hair Scarves For Summer 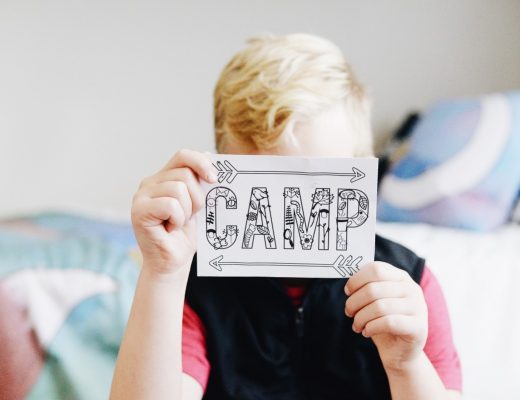 What Every Mom Needs To Know About Summer Camp

The first time I stepped way out of my comfort zon

"It doesn't happen all at once," said the Skin Hor