I try, daily, to remind myself that most humans are kind and well intentioned. I don’t get angry about brief stares. I understand that it’s human nature to do a double take when you see something about someone that makes them different. That said, I’d like to share some knowledge.

A capillary hemangioma is a vascular tumor that can range in size and shape. It’s a birthmark, essentially.

Sometimes they are referred to as “strawberries”. Hemangiomas are a defect that occurs extremely early in pregnancy when the vascular system is developing. There is no known cause or prevention. Depending on the location, they can be troublesome if left untreated, because some of their rapid growth. For example, a hemangioma that’s sitting near an airway could grow until it closed an airway or a hemangioma on an eyelid could block vision. They can also be a marker for some other more serious disorders. For that reason, most physicians will order diagnostic tests to rule out any other internal involvement as a precaution. For us, any other complication were eliminated and Charlie’s hemangioma was deemed cosmetic. She is observed by her specialists to make sure it doesn’t ever obstruct her vision and she takes a daily medication to keep it from growing any larger. Most hemangiomas involute or disappear eventually.

I’ve gotten a variety of remarks from family, friends, and strangers. I’ve done some thinking and I want to share our perspective as parents.

We don’t need to talk about it every time you look at her. We see past the color of her face. Charlie is Charlie and it’s part of who she is. It doesn’t need to be constantly commented on, critiqued, or questioned. While I don’t mind educating curious minds, I don’t need your opinion on how it its progress or the affect it may have on her. It’s a part of her unique beauty. It may never disappear, and guess what? It doesn’t have to. I would much rather chat about her latest milestone achievement, her amazing smile, or how gorgeous her eyes are.

She isn’t in pain or ill. She simply has an unusual quality about her appearance. The most common sentiments are “I’m praying that it goes away.” Or “Bless her poor little heart.” I’m constantly being asked “When will that go away?” I’ve even heard things as harsh as “turn her to her good side” or “Too bad, she’s so pretty otherwise”.

I encourage you to, instead of praying her hemangioma will disappear, pray that she grows into a confident girl who loves herself no matter what she looks like. Pray that constant comments and opinions from friends, family and strangers will end before she’s old enough to overhear them. Pray that she will be a strong person in the in an age where we are bullied for any number of reasons.

I encourage you to look past it. What if I came up to you and loudly asked “What’s wrong with your baby’s weird ____ ?” Or, “I will pray for your child that her (genetically unusual quality) goes away.”

Just consider that. Consider that you are offering to pray away one of my daughter’s beautiful features that makes her who she is.

Hold the pity. She’s a healthy baby girl and we are blessed. Her hemangioma is just as insignificant to who she is as a freckle on her arm. You don’t need to mention it, and you don’t need to wish it away.

She doesn’t have a “good side” that we choose for family pictures. I don’t retouch her hemangioma in photos. Her entire face is my sweet Charlie, and it doesn’t matter what it looks like. 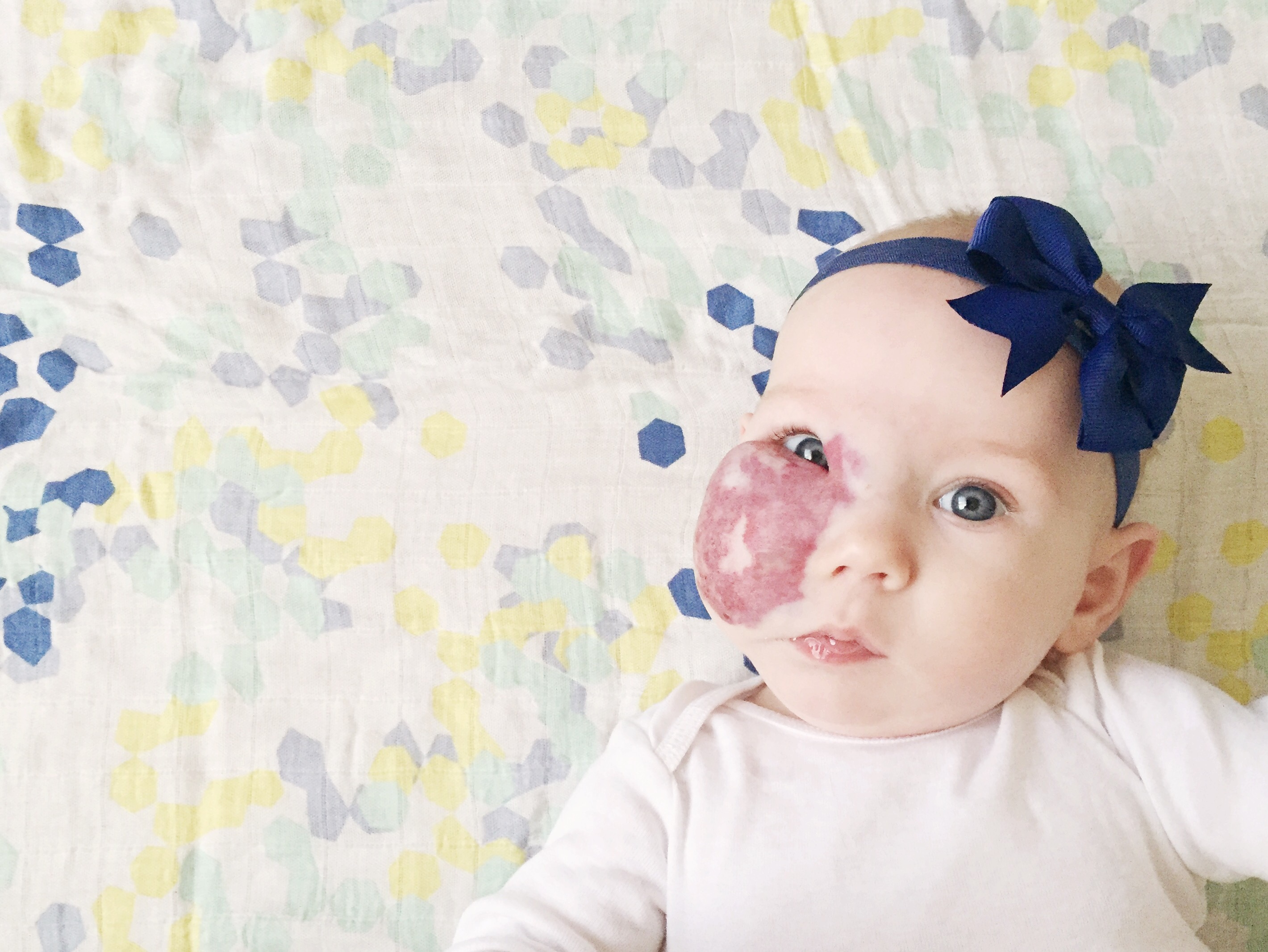 Edited 3/7/16 to add FAQ and answers in response to the viral media attention:

What medication does she take and when did she begin it?

She takes Propranolol, a beta-blocker approved to treat hemangiomas by keeping them from growing and to initiate the shrinking and fading phase (involution). She started the meds when she was six weeks old.

What specialists does she see?

She sees a pediatric dermatologist who specializes in vascular anomalies and a pediatric ophthalmologist every 1-2 months.

Does she have any other issues such as eye problems or breathing problems?

As of now, her vision is still perfect, as is the shape of that eye. Her airways are totally clear and she has no problems there.

Does it hurt her?

It does not. She doesn’t know its there.

How do you know she doesn’t have any of the other associated syndromes such as Sturges-Weber or PHACES?

With a segmental hemangioma such as Charlie’s it is protocol to test for other markers for these syndromes and do extensive imaging to make sure there are no underlying problems. She had a head and neck MRI/MRA, an echocardiogram and extensive blood testing during a three day hospital stay at six weeks old which was necessary to observe her as she started the medication.

Aren’t you worried she will be picked on?

Just as much as I am worried my son will be picked on. As a mother, I obviously don’t want either of my kids to ever hurt. I want them to be happy and loved and have a large circle of friends. However, I am not naive enough to believe that these things will come from the color of one of their cheeks. I plan to try and raise my children to be strong, kind, open-minded, loving people and I believe that those things will determine their successes in life. I have literally received hundreds of messages from adults who had hemangiomas as children who have told me that if anything it made them more accepting of others. I haven’t gotten a single negative response from anyone who has first hand experience with it.

If surgery can be done, why wouldn’t you do it?

All hemangiomas are not created the same. What you can see is the “tip of the iceberg” so to speak. Imaging is required to see where it actually goes. Every hemangioma on every person is totally unique. At this time, Charlie’s doesn’t require surgery because her hemangioma is not threatening anything. There are amazing medications in modern medicine that are being used to treat hemangiomas, and that is the route we are on. Should something change and Charlie’s health be threatened; believe that I will be the first to make sure she is taken care of.

Why do you want this to get attention?

You know, it has been a strange ride. I started blogging in November. My blog is about my life in every aspect. I felt like I wanted to get some of my feelings about the reactions to Charlie off of my chest, so I wrote about it. I didn’t publish it yet, though. I pasted it into a discussion board with only other parents of kids with hemangiomas to see what they thought. The response was huge and impactful. They all wanted me to use my blog to advocate for them, for our kids. I was nervous, but I posted the most personal blog post I have ever written. Another friend, who had a child with special needs, encouraged me to submit it to The Mighty (a site that includes many positive stories of people overcoming different illnesses or disabilities). So, I did. I thought those parents could relate, too. From there, it’s been picked up by a ton of news outlets. I lost count. At first, I didn’t know why it was taking off and was stunned by how many people related to my story. Then, the messages starting pouring in. Mothers who were moved to tears because they knew how I felt. People who have hemangiomas who found a greater appreciation for their own parents through my post. The occasional troll can’t dull the light that has come from this story, and I am so thankful. All I did was love my daughter and write about it. This is bigger than me. I am just watching it unfold. 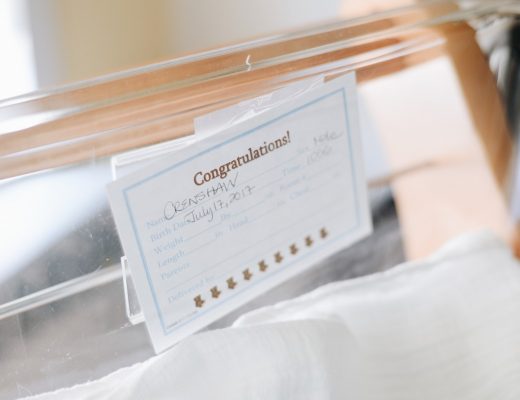 Why You Need A Birth Plan + Free Printable 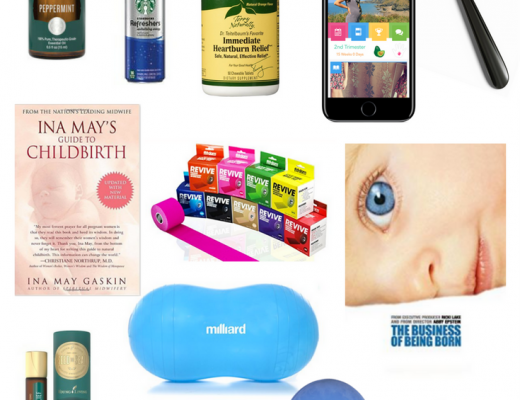 Pregnancy Essentials for Every Trimester

Moms of multiple, I have a hack for you. If you

I unexpectedly fell in love with the nation’s ca

Putting runners up in my stories. 💀 #katiesfav

The work from home life gets lonely y’all. 💀

I was a different person when I said that!!

Our body image journey isn't linear because life i

I’m really good at pretending I know what is goi

This is my exact face too. Please tell me this hap

It was time. Too many good ones building up. #ka

No context camera roll dump from the last couple w

@treehouse_grove really gets me, y’all. I’ve b